Famous activists such as Daniel Loeb and Bill Ackman may be retrenching and mounting fewer campaigns against large-cap companies, but there is one area where hedge fund managers are still finding lucrative opportunities: microactivism.

Since the start of the year, 61 micro-cap companies, those with a market capitalisation of $50m to $250m, have found themselves on the receiving end of attention from activist funds — companies ranging from a Canadian software vendor to a US luxury hotels group to a British tool hire business.

While their battles with activists contain as many poisonous public letters and aggressive legal tactics as the blue-chip showdowns of recent years, they are more likely to be played out away from the headlines.

And because the companies are less well researched by analysts, have access to fewer corporate advisers, and are less likely to follow corporate governance best practices, the potential for unlocking big share price gains may be greater than at larger groups, hedge fund managers say.

Activist funds which have targeted microcaps for decades are being joined by newcomers inspired by the famous players but without their financial firepower, and even some of the big names are moving down the market-cap scale.

“The inefficiencies that allow for good stock picking increase as you move ever lower down the scale, but as you move lower you face the problem of low trading volumes and of being able to deploy institutional-scale capital,” says Mick McGuire, the Ackman protégé who has demanded change at groups such as Bank of New York Mellon and Macy’s in recent years.

His hedge fund, Marcato Capital, has launched a smaller spin-off, with seed investment of just $75m, that is targeting small and micro-cap companies.

“Smaller companies do not have the resources for a large finance staff or business development team or for Goldman Sachs or for McKinsey,” Mr McGuire says. “There is an opportunity for activists to add value in a legitimate way.”

The number of new micro-cap targets this year compares with 56 by this point in 2015, according to Activist Insight’s global figures, and it is the only segment still growing.

By contrast, 16 new $10bn-plus companies have been targeted so far in 2016, compared with 22 in the same period last year, ending several years when the swelling size of activist funds — and the swelling ambitions of their managers — led them to go after bigger companies.

Investors pulled money from activist funds in the first quarter of this year after a run of disappointing performances. Activists returned 1.65 per cent in the first half of 2016, on top of just 1.15 per cent for the whole of 2015, compared with an S&P 500 total return of 3.8 per cent and 1.4 per cent, respectively.

At the most recent annual investor day for his fund, Third Point, Mr Loeb told clients that he was giving up activism for the time being, while stocks looked overvalued and there were better investment opportunities in the debt markets.

Mr Ackman — nursing a 33 per cent decline in the value of his fund, Pershing Square, since the start of last year — has sold positions in Mondelez, owner of Cadbury chocolate; Zoetis, the animal pharmaceuticals company; and Canadian Pacific, a railway business.

And Carl Icahn, who for the past two years has urged Apple, the largest company in the world, to return more cash to shareholders, sold out in April. In a regulatory filing this month, he said: “Current market valuations do not provide an opportune time to embark on large new investments.”

“A $200m company is too small for him,” Mr Neuhauser says. “At that size, Mr Icahn could buy the whole company. But for those of us who want to carry the baton, there is opportunity in microactivism for years to come.”

Some of the most vitriolic activist cases have involved micro-cap companies this year. At Hill International, a construction consultancy, shareholders were told that their annual meeting was being cancelled, hours before a vote that New Jersey activist fund Bulldog Investors believed would put its representatives on the board. 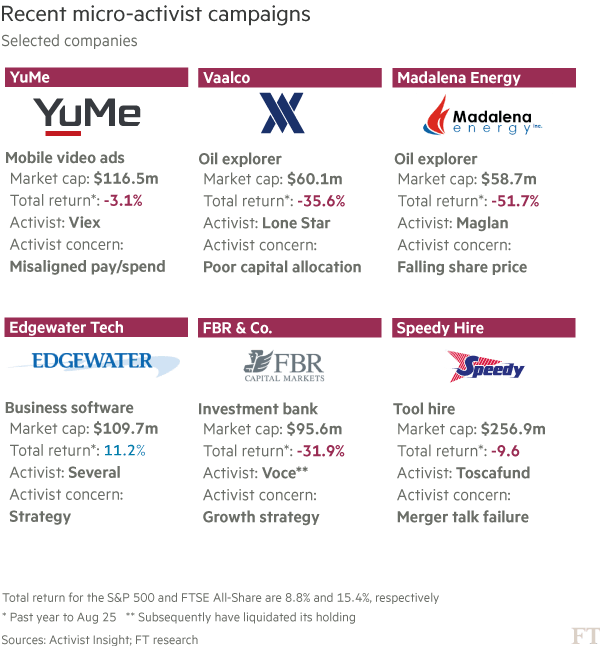 At Ashford Hospitality Prime, owner of the Ritz-Carlton hotel in St Thomas in the Caribbean, Sessa Capital took its fight for board seats to court. It lost the case, but AHP split the role of chairman and chief executive this month.

Ajay Khorana, global head of Citi’s financial strategy and solutions group, says small-cap campaigns are far more likely to escalate into a proxy fight. “Activists are no more likely to obtain board seats at small-cap targets,” he says. “This may reflect target management’s smaller perceived cost of fighting an activist when the company is small enough to stay off the front pages.”

Where microactivism may retain an advantage over large-cap situations is in the ability for hedge funds to push for a sale of the company, since by definition there are more buyers for small companies than for large ones.

“Our goal is to get a transaction,” says Phil Goldstein, co-founder of Bulldog Investors. “If you separate investors into two types, we tend to be the bird-in-the-hand type.”

How Important Is a Dividend to David Neuhauser?

How Important Is a Dividend to David Neuhauser?